← What information is in a criminal record check? How much jail time could you face if found guilty of sexual assault? → 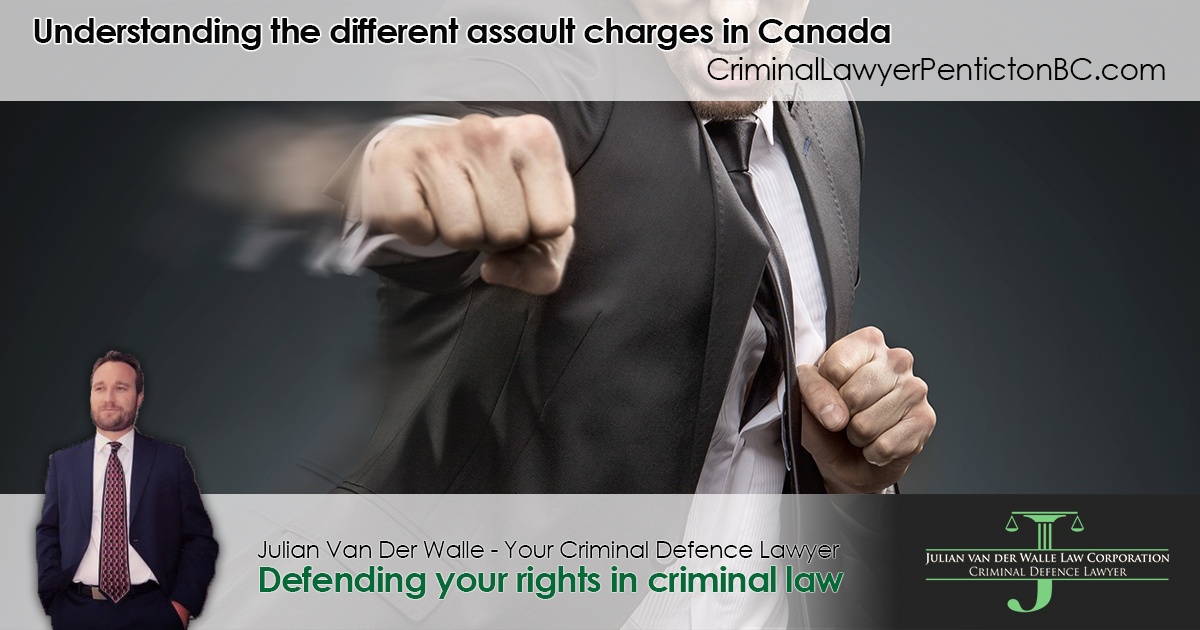 One especially confusing portion of Canadian federal criminal law are the different classifications of assault charges. Under Canadian law, assault can mean many different things in many different contexts. If you have been charged with criminal assault, it is important to understand what you are being charged with and why. This knowledge will be important to help inform your decisions regarding whether to hire an attorney or plead guilty to the charge.

What Is Assault Generally?

An assault is the most generic category of violent crimes in Canada. Four types of criminal acts can be considered “assault” in under the federal criminal law:

Technically, an assault can be anything from a threat to a very serious injury. Rather than think of assault as its own type of crime, it is easier to think of other categories of crimes as types of assault. For example, a murder is an assault where someone died, a rape is a sexual type of assault, and uttering threats are an assault without physical violence.

There are several different kinds of assault crimes that we would consider to be normal types of assault. Confusingly, each of these types of assault carries different criminal penalties. For example, assault with a weapon, assault causing bodily harm, and assault of a peace officer are all separate crimes carrying different meanings. Domestic violence assaults similarly are distinguished from normal forms of assault.

Finally, other types of assault can be charged where no one was actually injured or harmed in any way. The most common examples of these types of incidents would include a non-violent mugging or an attempted assault. In certain cases, the crimes of uttering threats and causing criminal mischief will also be charged, both those crimes are generally only charged in more serious cases.

Like all other crimes, assault crimes will result in a criminal sentence if the accused is found guilty by the court or a jury. In many cases, simple assaults and charges for making threats will be brought as summary conviction offenses. In those cases, the maximum sentence for a charge will be six months or less, but the court may also impose a fine.

How to Defend Against an Assault Charge

There are many different possible legal defenses to an assault charge that could either reduce the severity of the charge (and thus the criminal sentence) or excuse the charge entirely. The most common of these legal defenses is the argument of “self-defense.” For example, if two people engage in a fist fight in a bar, either of them could likely argue that they were defending themselves from the other brawler. When meeting with your criminal defense attorney, you should be sure to discuss any defenses or excuses that you may have to determine if any of them might constitute a valid legal defense to the crime.

END_OF_DOCUMENT_TOKEN_TO_BE_REPLACED

Bad IRP Decision? What Can You Do About It? Drivers who are caught driving under the influence by the police may receive an Immediate Roadside Prohibition (IRP) on driving. An IRP is a temporary driving suspension that prevents the recipient from driving for a set...